Why Some Ridiculous Baseball Contracts Kind Of Make Sense These Days 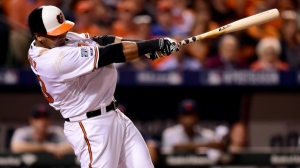 Last month, when the Nelson Cruz signing was first reported, my first reaction was a spit take, and a facepalm, and not necessarily in that order. The Mariners gave the 34-year-old former Oriole slugger a four-year, $57 million contract which, at first, seems rather questionable. Granted, Cruz was great last year, hitting .271/.333/.525 while leading the majors with 40 home runs. He also hit well in the playoffs and has been a postseason monster throughout his entire career (1.016 career playoff OPS). Since 2009, Cruz has averaged 29 homers and 86 RBIs per season. Not bad. Not bad at all.

So why are people questioning the sanity of the Mariners after they signed Cruz to this contract? A lot of reasons, actually. Cruz is one of those slow, rather unathletic power hitters with no defensive value whatsoever, and he’s played in 130 or more games in a season exactly twice in his career (2014 being one of them). Slow, oft-injured, one-dimensional players -and this may shock you- tend not to age well, and the Mariners will be paying him through his age-37 season. Does that sound like a great use of $57 million?

It probably won’t be. Is there really any chance Cruz will be worth $57 million to the Mariners over the next four years? Cruz was great last season and has posted an OPS under .800 just once in the last six seasons. Even in Safeco Field, he should hit a lot of dingers. He’s a top-quality run producer, and figures to remain so next season. Over the entirety of the contract, though? Things get a little sketch.

Based on the history of Cruz-esque players at age 34, we can kind of predict how this will go. In 2015, Cruz should be just fine. In 2016, he’ll probably drop off quite a bit, but still be a functional DH. In 2017 and 2018, his age-36 and age-37 seasons, there’s probably a pretty good chance that he’ll be totally worthless, with lots of injuries thrown in, and I wouldn’t bet against the Mariners having to just eat his final year. You know who reminds me a little of Nelson Cruz? Josh Willingham. You know who just finished a three-year deal that basically followed that theoretical four-year production outline for Cruz? Josh Willingham.

So looking at it this way, the Mariners are paying Cruz for four years when it’s relatively clear that he’ll be good for, at best, just two of those seasons, and realistically probably only the one. The team might be knowingly flushing two years’ worth of cash down the drain. This should be grounds to tar and feather the entire Mariner front office, right?

Well, no. It might actually make some kind of sense, in some circumstances, for teams to hand out multi-year contracts, even if they know that the player will only be worth it for a fraction of the deal. This may seem contrarian, obviously, but have I really gone insane? Have I been drinking the Jack Zduriencik Kool-Aid? (ew) To find the reason for why the Cruz contract isn’t totally nutso, all you need to do is look at what the Mariners did in 2014, and then look at what the Giants did in 2014.

The 2014 Mariners finished at 87-75, just one game out of an American League Wild Card. Perhaps the major reason that Seattle missed out on the postseason was because they got nothing from their DHs, and I mean nothing. Collectively, Mariner designated hitters batted .190/.266/.301. I mean, are you kidding me? This is from a position where hitting is the only necessary skill, and the Mariners still couldn’t find anybody competent. Not Corey Hart, not Kendrys Morales, and goodness knows not Stefen effing Romero or Endy Chavez.

If the Mariner DHs had put up just a .620 OPS, they would have beat either the A’s or Royals for one of the Wild Card spots. If they had had Nelson Cruz last season, they would have sailed into the postseason. Which is funny, actually, because they very nearly did have Cruz. The Mariners and Cruz actually reached an agreement on a one-year deal with an option year last offseason, only to have Mariners ownership nix the move. Now they have him, but he’s way more expensive. Oops.

So you can see why Seattle is so enthusiastic about signing the 2014 home run champ. Regardless of what he does over the rest of his contract, 2015 Cruz will almost certainly be worth three or four wins more than what the Mariners got from their DHs last season. That would push the Mariners closer to the 90-win threshold and the postseason, and if they make the postseason, they’ve got a great shot (or probably as good a shot as anybody) at winning a title. And that’s what makes this signing (and other signings similar to it) not insane.

Let’s now look back at what the Giants did in 2014. The Giants were not a great baseball team, but they rolled through the postseason anyway because they had one dominant pitcher, just enough hitting, a just-competent-enough bullpen, and also because the small sample size of a playoff series can and did lead to all kinds of wacky, unexpected things. Despite the long odds (they had to navigate the Wild Card game and also four rounds without home field advantage), just the fact that they were in the October tournament meant that they had a chance. Then, behind Bumgarner, Pence, Sandoval, some good fortune, and some really goofy decisions by Matt Williams, they ended up winning it all. Improbable, not impossible, and that’s why just getting there is so important.

Which is why it makes sense to overpay Nelson Cruz. The Mariners missed out on the postseason and a chance at the glory by one game last season. One measly freaking game. They feel they have a window in 2015, and they’re going for it. That doesn’t seem foolish, really. With star hitters Robinson Cano and Kyle Seager and an all-world ace in Felix Hernandez, the Mariners have a core that should be good enough to contend again. If Cruz is the extra shove that gets that combustion engine going, then signing him makes all kinds of sense. If the Mariners make it to the postseason, it’s not hard at all to envision Felix Hernandez pulling a Bumgarner and mowing his way through the postseason to bring Seattle a title.

With the playoffs structured as they are currently, there are more teams qualifying for the playoffs each year (five per league) than ever before in baseball history. Especially now that franchises are becoming wise to the small sample size fooferah inherent in short playoff series, there’s more incentive now than ever for teams who are on the cusp to spend the extra dollar and make a playoff push.

But why pay out Cruz for four years? Why pay him two more years than he’s likely to be worth? It’s just the cost of doing business. Players are going to want more years tacked on for security purposes, so in order to get those one or two good years, you gotta break some eggs. Imagine the creepy, neckbearded dude in the corner with the camera rasping out: “You want to win a championship, don’tcha?” You want All-Star production and a shot at a title in 2015, don’tcha? Well, to get that you gotta do some…things. Things like pay Cruz a lot of money in 2018 when he’s probably going to stink.

If that doesn’t seem worth it, consider this. Take all of the Giants fans in the world and give them these two options: either sign Barry Zito to that onerous seven-year deal and win two World Series, or don’t sign Zito to that big-money deal, but no championships. Well, every single one of those Giants fans would obviously take the first option. Fan bases can generally stomach a terrible contract if there’s winning involved (and Zito did play an important role on both the 2010 and 2012 championship teams). If the Mariners win the 2015 World Series and Cruz hits .800 in the postseason absolutely no one in Seattle will care if he needs to be wheeled onto the field in 2018.

So it boils down to: flags fly forever. There’s a lot of guffawing when some of these contracts are signed, and even I did a double take when I first saw the Cruz deal. However, with the way the postseason is structured nowadays, and with the obscene amounts of money rolling through MLB right now, I think it actually makes more sense than ever for teams to sign players to “go for it” contracts despite the potential long-term issues. The 2015 crazy contract isn’t the same as the 1997 crazy contract. Maybe crazy is the new market inefficiency.