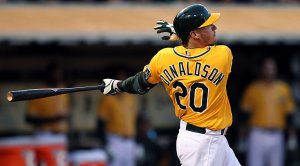 You’ll have to forgive A’s fans for having to be talked off the ledge this morning. The Oakland A’s have a long and (for their fans) frustrating history of trading their young stars just before they hit arbitration. Even if it drives fans crazy, it’s a perfectly sensible strategy for a team on a tight budget like the A’s. When a player still has a few years left under team control while still being paid below market value, his own value as a trade chip will never be higher. Thus, the expected return will be higher. At least, in theory.

As A’s fans can all too readily recount, this happened with Dan Haren and Gio Gonzalez, who enjoyed star seasons before being traded away for prospects (Haren netted the team Carlos Gonzalez, whom the A’s traded a year later for Matt Holliday…oops). Now, it’s happened with Josh Donaldson.

The A’s pulled off a jaw-dropper of a trade yesterday- one nobody saw coming- trading their star third baseman to the Toronto Blue Jays for tatted-up third baseman Brett Lawrie, pitchers Kendall Graveman and Sean Nolin, and 18-year-old shortstop prospect Franklin Barreto. Judging by the reaction on Twitter, A’s fans are now ready to storm Billy Beane’s house with torches and pitchforks.

Donaldson was likely a casualty of the A’s decision to basically go all-in at the trade deadline last summer. The team had to surrender its star shortstop prospect, Addison Russell, in order to acquire Jeff Samardzija. Since the A’s can’t afford to have a huge payroll, they’re in perpetual rebuild mode, and since their efforts to win it all last season ultimately failed, they had no choice but to make sacrifices to rebuild some of their farm system. For Donaldson, the A’s got a shortstop prospect, plus a cheaper third baseman with high upside and some more pitching depth.

Before all of you A’s fans start drinking cocktails made from the stuff under the sink, note that this trade really might not be as bad as you think. First off, we can’t really judge a trade’s merits until at least two (probably three) years down the road. This trade looks nonsensical now, but stuff happens, so two years down the road everybody might be singing its praises. In fact, the trade that brought Donaldson over in the first place (in which the A’s gave up Rich Harden back in 2008) was roundly ripped by A’s fans when it was first reported. Obviously, that one turned out pretty well. 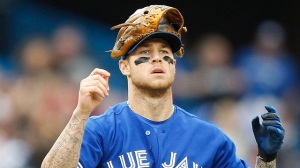 Let’s take a look at Brett Lawrie, who is the main chip coming the Oakland’s way in this deal. Lawrie was once regarded as a top-50 prospect two years in a row by Baseball America. He burst upon the major league scene in 2011 when he hit .293/.373/.580 in 43 games, and of course that raised expectations. Ever since then, he has struggled both with inconsistency and injury. Since his outstanding debut, he has slashed .261/.316/.406, disappointing numbers by any measure. He has also missed time due to injury in every season, and he only played in 70 games last year due to an oblique injury.

However, he’s still only 25 years old, and he’s still got a lot of untapped potential. Former NBA writer/analyst John Hollinger used to discuss what he would call the “second draft” for prospects who were failing to live up to their potential. In the NBA (and in baseball, for that matter), every so often you’d get a high draft pick who would struggle initially with the team that had drafted him. Many times, that team would give up on said player after a year or three and trade him.

Sometimes that player would then blossom with the new team, whether due to better coaching or a general change of scenery, making the “second draft” concept a reasonable way to acquire unrealized yet high-upside talent. The Sacramento Kings tried this very thing with Derrick Williams last season, although as of yet it hasn’t really panned out.

I think Lawrie is a great “second draft” candidate because, again, he’ll just be turning 25 and still has loads of talent that just a couple of years ago made him a darling of scouts everywhere. The injuries he’s battled have likely played a big role in some of that unrealized potential. Sometimes it just takes time for a guy to really find his comfort zone. Remember, A’s fans…Josh Donaldson didn’t do a damn thing in the majors until age 26, and didn’t turn into a star until 27. The A’s are gambling that the same will happen with Lawrie, and that’s not a bad gamble.

Also, despite only playing in 70 games in 2014, Lawrie set a career-high with twelve home runs. Extrapolate his 282 plate appearances out to 500 and he’s a 20-homer third baseman. He’s also a solid fielder (his metrics probably overrate him, but still…) and he could potentially slide over to second base if the A’s make a move to acquire another third baseman (there was a rumor floating around that they were considering Chase Headley). If the A’s decide that he can handle second base and he contributes 15-20 homers there, that’s a huge upgrade over Eric Sogard.

I think this trade will work out a lot better than A’s fans currently expect. I’ve always liked Lawrie and, even though the average and power haven’t come yet, he’s traditionally been good at making contact, a commodity that is becoming more and more sought after these days. He’s also a fiery competitor (sometimes too fiery) and I think A’s fans will take to him quickly.

On top of that, the A’s got two pitchers who project to be solid contributors to a major league staff. As the A’s found out last season with all of the injuries, you can never have too much pitching. This trade adds that much more rotation depth and the A’s have a good history of turning randoms into valuable bullpen arms.

From an emotional standpoint, though, this trade definitely sucks. Donaldson was, for good reason, one of the team’s most popular players, and power-hitting, Gold Glove-caliber third basemen don’t exactly grow on trees. It has to be frustrating for a fan base to see their favorite players traded away year after year, however justifiable it may be from a financial standpoint.

When all is said and done, I think this trade will turn out okay for the A’s. However, I don’t blame the A’s fans who are currently venting their frustration after the face of the team became yet another casualty of the franchise’s ongoing cheapness.