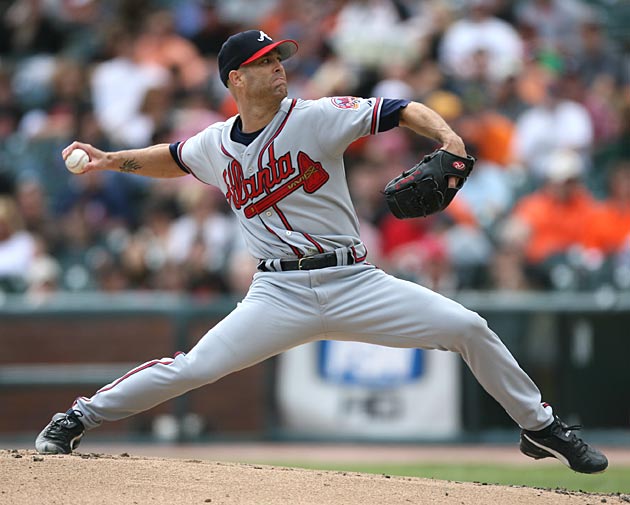 My first reaction to the Giants’ signing of Tim Hudson to a two-year, $23 million deal was that this move is just so, I don’t know…so Giants. The team needed, badly, to fill out and fix what had been a truly crummy starting rotation last year, and they did it by outbidding everybody for a pitcher in his late-30’s coming off of a brutal injury. Even with two championships under his belt and far removed from the Dave Roberts/Rich Aurilia free agent frenzy of yore, GM Brian Sabean just can’t shake that reputation for having a weird veteran fetish.

That isn’t to say that this is a bad signing. Not at all. I freaking love Tim Hudson. I’ll always remember his call-up midway through the 1999 season as the ominous first warning shot to the AL West that the new, improved Billy Beane-era A’s would soon be a force to be reckoned with. Sure enough, Hudson went 92-39 for those A’s from ’99 to 2004 as the team turned into a powerhouse, winning over 100 games in both 2001 and 2002.

Nine years after being traded away by Oakland (for Dan Meyer, et al, in one of Beane’s worst trades), Huddy is back in the Bay Area, this time wearing the Orange and Black. Hudson isn’t quite the same animal as the pitcher the A’s had in the early-aughts, but he’s nonetheless remained one of the National League’s better starters since his first season in Atlanta in 2005. His ability to avoid giving up home runs and free passes has remained uncannily consistent throughout the past decade, and that has enabled Hudson to pitch at an All-Star level (or close to it) for a long time despite strikeout rates that aren’t exactly eye-popping.

Hudson doesn’t come without some concerns, though. When we last saw him, he was helping us work out or gag reflexes after suffering one of the nastiest injuries you’ll see on a baseball field. Hudson was having a typical quality season until July 24, when he went down with a gruesome ankle injury when he was stepped on by a runner while trying to cover first base. He went on the DL for the rest of the season and some even questioned whether he’d ever be able to return, but by all reports he’s fine and dandy for spring training.

The injury is what screwed down Hudson’s price this offseason, but the Giants decided to blow everybody out of the water anyway. It’s doubtful that any other team was offering close to $23 million, but the front office probably figured they would eliminate the competition for a pitcher with extremely high upside by throwing a high dollar amount at him. They went all-in and everybody else pulled their 6-3 straight draws off the table.

This should be a good signing for a variety of reasons. First, Hudson is a good pitcher. Case closed. Wow, Rice, when you put it like that. I know, simplicity.

But seriously, the Giants had major issues with their starting rotation and this goes a long way toward curing what ailed it. Hudson hasn’t posted an ERA over 4.00 since 2006, and that was an aberration caused by a freakishly high (for him) walk rate. Since coming back from Tommy John surgery in late 2009, Hudson is 59-34 with a 3.35 ERA. Simply put, he’s one of the most consistently good starters in the NL. The two years of the contract aren’t onerous, so even in the unlikely event that Hudson totally flames out, he won’t be some kind of long-term albatross like Barry Zito was.

It’s fair to question whether Hudson will have lingering effects from the injury, but it’s doubtful the Giants would have signed him without making sure he had a clean bill of health. His age is also a question mark, but he was effective last season at age 37 and his peripheral numbers have held more or less steady for nearly a decade.

If you’re a skeptic about this signing, look at it this way. The Giants were going to go after a free agent pitcher who didn’t have a qualifying offer extended to him by his former team, and it was going to be a pitcher that they wouldn’t have to guarantee a lot of years to. Figuring that guys like Matt Garza, A.J. Burnett, and Ricky Nolasco are going to command three-year deals at the minimum, you’re left with a whole lot of Dan Haren, Bronson Arroyo, and Jason Hammel. Would you rather have one of those guys over Hudson? I sure as hell wouldn’t (though the Giants are still allegedly in on the Arroyo sweepstakes).

Hudson probably can’t be counted on to toss 200 innings, as with any pitcher approaching 40, but if he reaches 170-180 innings and matches his Braves-era numbers (his ERA in nine seasons with the Braves was 3.56), then he’ll do just fine. He gives the Giants a rock solid front three to go along with Matt Cain and Madison Bumgarner, and if Tim Lincecum has a good year, the Giants’ rotation will once again start looking like one of the best in the league.

I love the signing, love Tim Hudson, and love the idea of a former Bay Area fave returning to close out his career with the Giants. Come to think of it, the Giants still have a fifth starter opening after this signing. What’s Mark Mulder up to these days?

This entry was posted in Uncategorized and tagged san francisco giants, tim hudson. Bookmark the permalink.